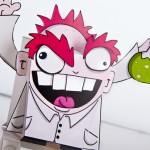 I’m all about experimenting with things, and this .5 episode of the podcast gives me a great opportunity to play mad scientist.

It’s going to be a few days before the show is accepted into iTunes, so I decided to spend some time experimenting with video.

I set up a YouTube Channel (www.youtube.com/user/theauthorbiz) and did a quick slide show type video for the show.   I’m just learning how to work with video, and I’ve got to say it’s not the most intuitive thing in the world, but what the heck,  I’m learning.

Why You Tube for a podcast?  Well, like I said, it’s an experiment.  But, did you know YouTube was the second largest search engine in the world? If people are searching for anything and everything already on YouTube, it makes sense to be there.

It’s one more metric to track, and it will either add some value to the show, or it won’t.  Either way I’ve already learned a great deal.

I’ve seen other authors with established YouTube channels, (hello Cara Brookins & Joanna Penn) and they seem to be doing very well, but they are each doing actual video, rather than slide shows.

I’ll report back with the results of the experiment in a few weeks.  Time for me to head back to the lab.